Mozambique – The road to Manjacaze

WILD CAMPING MOZAMBIQUE
Eventually the track we stuck to for the last 3 days pops out of the bush and hits a well made dirt road heading towards Massingir Dam ….Victor makes it to civilization and our limbs are intact.
The Safari park guards stop us at a boom gate and ask where we have come from….I hesitate but tell them our journey. They are confused and ask us to pay 250 metcais…..Sorry we do not have any money….the guards are not impressed……….where is the nearest Bank I ask them…..They tell me there is a Bank on the other side of the Dam wall 5klms we must return with the money…..
I have no idea where the bank is but returning with the money after we were on the menu for 3 days was not on my list of priorities but we were off hoping our visa cards would work…they did and we had some local cash at last.
They did work….great……. we can buy a cold beer at last and they went down very well. The weather looked as if it was going to pour down and not long after this observation the clouds opened up and the rain came down in torrents. 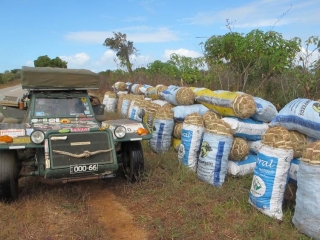 Victor checks out the endless charcoal along the EN1 MOZAMBIQUE

THE ROAD TO MANJACAZE
WE wild camped about 15klms from Chibuto the road was awash the thick wet red sandy road a nightmare, on coming cars weaved all over the road trying to miss large lakes of water which had consumed the road. I managed to pull one family from the mire they were so nice and offered us to stay with their parents not far along the road we were heading.
The weather did not improve after pulling this small sedan out from the quick sand I asked how long had it been raining here….about a week the young man with his family replied the roads are terrible but your car will have no problems.
We left them as they pulled away navigating there way along the water drenched road. Our campsite was off the wet red sandy road parked behind some huge Mango trees, popping our tent in the rain is not fun especially when we expected the dry season to be dry!!!
It rained most of the night with large flashes of lightning, but nobody disturbed us and we had a deep sleep the rain lulling us to stay in bed.
We had not washed well for 6 days and a shower would be good if we could find a decent campsite a warm shower would be great. Elayne was not complaining even when I Dam well know she hates mud and rain it’s just so hard to deal with while in a tent.
It was not long we had found the EN-1 the main artery which runs South to North in our case…..but guess what…..yes I overtook a truck which turned into 2 trucks chugging along as I passed the second truck I spotted a policeman stood smack bang in the middle of the road waving me over.
We checked our speed and we estimated we were around 85klms per hour and we had entered a sixty zone the trucks blocking the speed reduction sign when I passed them.
Well the policeman told us our fine would be 3,000 metacais something we did not have.
He asked for our driving licence and I gave him my photocopied International (Australia) licence.
He inspected the flimsy photocopied document and asked me for the original…..It is an original I replied one of many we have……He was not amused and insisted we hand over the original.
Please take us to your police Station and I will hand over my original…..Off he went in a huff returning in a few minutes asking for 3,000 metacais……I don’t have that money this is our first day in Mozambique and we have no local currency.
He went again back to the other officers parked under a tree their Radar gun pointing at the on coming traffic.
He again returned and said we could go…….I thanked him for his consideration and we drove off.
We had been warned about the first part of Mozambique as most South Africans pass this way heading for the local hot spots not far up the coast, the further North you travel you will not find the Mozambique police operating a radar gun, which proved to be true in our view.
W/P 770 South 24’ 44.058 East 033’ 46.095 85mts above sea level temp 14c
Camped off the side of the En-1 30 klm’s from Vilankulos still no shower ….PHEWWWWW
Called into a town Mapinhan had a beer which did go down well, will have a look at Vilankulos and hope to find a campsite.
We found everything a little down the sky was overcast the beach looked shabby and generally we are getting to picky.
Off we head still no shower but this has become our goal to-day. The countryside was lush and green little stalls alongside the En-1 sold everything we needed….so many tomatoes just tons and tons, cashew nuts by the ton and all was very affordable and tasty.
Living on Cashew nuts and tomatoes is what we did and that was fine as we both loved the cashew nuts 2kgs was lasting just a few days…until I started to check the colour of my excrement…NOT SO GOOD!

One Response to Mozambique – The road to Manjacaze