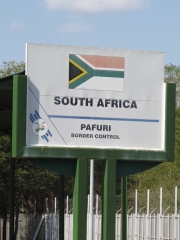 The Border was a very quite crossing the South African police sleeping at their post, the customs officers are unsure why they need to stamp our Carnet the customs document almost not recognized by them. Elayne insisted they stamp with what ever stamp they had….finally Elayne emerged from the small Customs post thumbs up.

They insisted in inspecting under Victors bonnet which I showed them….nothing to declare I exclaimed insisting this was all we had to show them. No South Africans here …we were disappointed as we thought there would be a convoy of South African 4×4 chaffing at the bit to cross into this region……nothing had come through and we ask if there had been any foreign travellers coming this way recently…….NO….they replied.

Finally we were stamped out of South Africa and the Mozambique border lay a few hundred meters beyond. Portuguese was not on our language skills list, Brazil the last time we practise any ….ob re gardo….no other words came to mind except out rudimentary Spanish which did help sometimes. 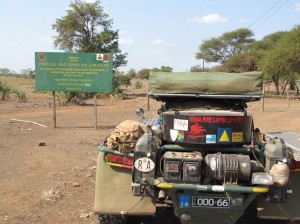 We approached the Mozambique border post slowly and met with friendly guards who pointed and directed us to stop and disembark. I asked if I could take a photograph and it was meet with no but a few minutes later they piled onto Victor as I snapped away.

This was a far cry from the smart Kruger Park….everything was run down, had Africa had come to meet us at last, no super markets, no fuel stations, no

Smart shopping centres we had come to take for granted for the last 6mths …….just a newly painted sign

It stood out like a sore thumb as if to indicate for the newly arrived things are looking up for the safari junky ….at least we knew we were somewhere near????

A huge Baobab tree was in the distance the only rutted track lead towards the huge tree and off out of sight, mud huts and a traditional healer’s hut was close by.

All felt poor and it gets poorer as we head off papers stamped but we have no Metcas the currency we need for Mozambique. There were no hustlers no money exchangers people don’t come this way that often…no money this will be a challenge Elayne exclaims………sure hope we have enough fuel to get into some civilization???

It was soon clear we had entered that Africa we so wanted to see this landscape but so fast it was like visiting another planet the Kruger and its 3,000,000 visitors a year and nobody on this side!!!!

Just nobody no beautiful 4×4’s no perfectly laid out facilities no camping sites …nothing but forest and huge Baobab Trees all shapes and sizes they are just mesmerising totally mesmerising.

No facilities no nothing ,it hits us fast and we were only just prepared for it ….only just, camping wild was going to be a challenge as we pass mud hut after mud hut village after village thick forest and no tracks leading of the small track we are currently on. Huts with large stakes creating safe corrals for there animals at night seam to be the norm.

GREAT Elayne exclaims canvass walls again ….I thought the Mozambique people living here had eaten all the wild animals….I reply gingerly……I am sure they have mostly disappeared eaten by the locals…….I’m sure….I again reply ….trying to convince myself all was safe in this Mozambique bush. 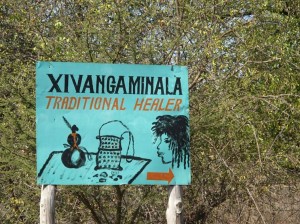 Are we even going the right way? no signs, no nothing just a sandy track cutting through a fever wood forests a sure sign Malaria is around ,so iridescent green are their slender trunks the brilliant blue sky a cutting contrast ……….they are so photogenic 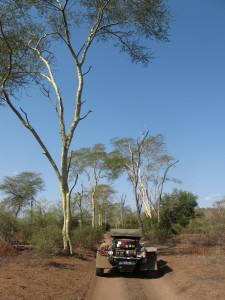 I stop and fire a few shots with the camera, but time is passing and we need to find a campsite and we are out of practise and I am secretly praying there are no wild animals around to-night. 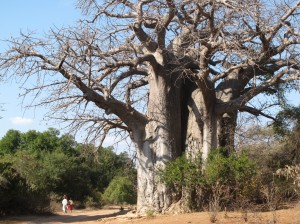 Someone planted these upside down…????

It’s getting Dark and we have pulled off the track amongst thickly wooded trees hoping this will keep us from being seen from passers bye.

Elayne and I hear drums beating and chanting it’s not far away …boom boom the rhythm constant smoke rises from some mud huts in the forest close bye. Can you hear people talking Elayne exclaims….I listen…Yes I reply it’s getting closer animals too.

We spot a small herd of Cattle silhouettes passing, the Tropical evening light fading fast as the sun sets leaving a violet light.

The Cattle are being escorted back to the safety of the village corrals and some youngsters pass closely bye spears in hand chatting away to each other ….they do not spot us snuggled into the forest backdrop.

We opt for a small evening meal we are tired from to-days sharp contrast and border crossings. Elayne is listening to the drums still beating in the background; it feels very strange very African, such a sharp contrast from 24hrs earlier. The temperature drops its cool even chilly as we climb up into our tent I make one last walk around checking the darkness I see nothing just the sound of beating drums. 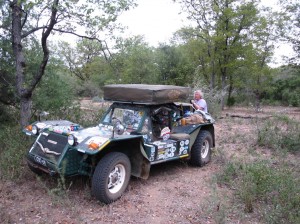 The Kruger Park offering the safe guarded immaculate campsites the neatly arranged facilities and clean showers…all gone Elayne exclaims civilization all gone…beating drums and wild animals to look forward to and we have started to smell.

I lay awake thinking about our foray into Africa…are we really prepared for this off road no back up adventure. No cell phone, nobody even knows we are here!!!!…will Victor make it no plans no nothing just an ambition to see the world and what it has to offer.

We have done this before I remind myself …but somehow this feels different. A strange smell wafts over the tent and we can hear something walking close bye. Can you smell that Elayne exclaims ….I nod my head on the pillow and check the darkness outside…….I’m not going outside to investigate…I reply quietly… The smell passes and we drift off to sleep some what weary but tense they could have been hyenas but we will never know. 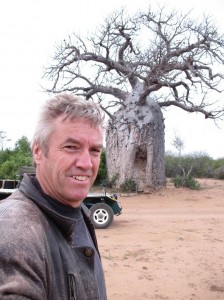 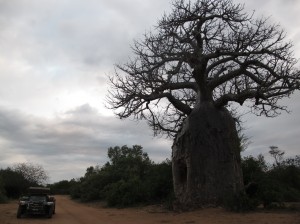 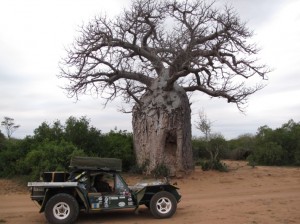 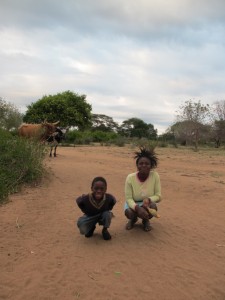 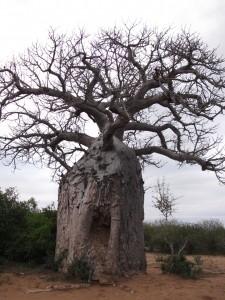 The morning comes with that hot tropical feeling that you can’t stay to long in bed and we need to push on. We pack quickly as we do not want to upset any local customs chiefs or Local’s camping on someone’s land without any permission.

Victor pulls out of our snug forest campsite onto the track heading for our Limpopo river crossing.

That unshaved some what grubby feeling descends up us the usual hot morning shower vanished the dusty track has already taken its toll and we don’t want to use our water until we find some more.

So many villages mud huts shaped with wooden sticks/stones and then plastered with dung and mud, animals every where Cows, Goats look as if they are well looked after there protective corrals still send a message of uncertainty.

Our first night in Mozambique was a stark contrast from the luxury we had been enjoying in Swaziland and South Africa. The morning soon became overcast even the Tropical atmosphere had changed. Cool and overcast grey skies greeted us we were cold and out came our jackets!!!!

It was clear we had not camped far from the Limpopo River and as we stopped and I walked along the rivers side high above the waters edge, I looked down on several very large Crocs’.

I quickly ruled out any riverside camping in the future and returned to Elayne with some river shots but ignoring to elaborate on the large reptilian wildlife at the waters edge.

Bashing my way through the riverside undergrowth slowly returning to Victor reminding myself that I was not alone…when a huge crashing through the undergrowth very close by took me completely off guard as it sounded like a wild bull charging….I could not decide which way the noise was coming from or going to only to hear a huge splash into the Limpopo River……YIKES that was a big bugger….

The Baobabs we splendid indeed just a magical sight the upside down tree with its roots pointing in the air massive would be an understatement indeed they are just huge and so calming when you stop and study them their huge trunks completely out of proportion to the canopy.

We finally made our way to the waters edge spotting a few locals with animals and bags and every other transportable object you can imagine……BUT NO BRIDGE………just a small ferry just wide enough for a small car and nothing to spare.

I quickly made friends with the locals who were stuck fast in the sandy banks needing a shovel, I quickly gave them ours to extract the stricken beaten up sedan, but they needed more than a shovel but with a few volunteers all pushing and panting we were able to get the small car to the very small ferry. Elayne was sitting in Victor keeping an eye on things as I scouted around checking out the possibilities of crossing under our own steam.

We had no local currency and after a long chat with the ferry owner they decided it was going to be $60.00 to cross and they were not happy in accepting Usd. I on the other hand had decided not to even take there offer up as when I checked the clearance Victor was to FAT.

I returned to Elayne….what now I asked what can we do!!!!!

We would need to return to South Africa and head to the coast at Maputo the distance I have not even calculated but it was going to be a big back track indeed.

No roads existed on our maps nothing following the Limpopo River not one track, I asked the locals who told us it was possible to head East along a track through the Limpopo Transfrontier …..

This was our only option…No maps just a compass heading hoping the track we chose would get us through.

Great Elayne express’s her delight in this very skimpy sand map drawn at the waters edge….what can we do I express my thoughts its our only chance to head in a direction which would save us hundreds and hundreds of kilometres plus crossing back in South Africa loosing our Mozambique visa’s.

Heading off on this unknown adventure looked right up my street …this will be ok I expressed to Elayne there must be vehicles heading along the Limpopo…my brain completely disengaged from the wildlife aspect.

Off Victor trundled back onto the bush tracks heading in an Easterly direction, the track was great fast and sandy and we were flying along me having all the fun at the wheel weaving side to side as Victor was on his terrain.

The bushes were close very close and we were scraping the thick thorny bushes with gigantic thorns poking at our venerable rubber tyres….ease up Chris, Elayne exclaims this is getting bad….Sure enough the thorns had already pieced our tyres hopefully no punctures.