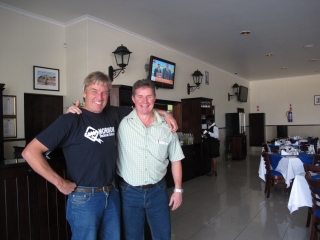 Sad was not the feeling I had when we finally needed to move on from our wonderful stay in Swaziland. Words would be hard to find to try and explain the friendship which was cemented between two families’ in such a short time.

It was chocked up throats and wet eyes and words never really needed to be spoken as we hugged our farewells in up town Johannesburg as I returned back to Swaziland in John’s Toyota back to Qwabit (John’s house) in Swaziland as John was heading off for a week of rugby in Kenya, just to prove what big babies we really are.

Leaving the safety and beauty of Qwabiti was going to be hard especially the hospitality which Elayne and I had enjoyed so much. Victor had been looked after so lovingly, John’s workshop team had spent hours putting all the possible attention Victor could had ever wanted.

The list of parts and spares bestowed upon poor old Victor was almost endless, every possible chance John had to visit the workshop (any excuse for John to leave his office and muck in) was to try and find another part to donate from his racing stores. 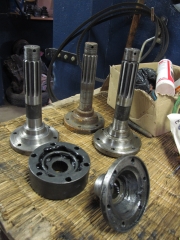 Victor had spent some weeks in John’s workshop while Elayne and I enjoyed one of John’s company 4×4 Toyota Landcrusier’s  to drive around in…..it was tough getting back into Victor’s naked interior after several weeks purring along in faultless engineering.

I arrive late one morning at Mormonds office in Manzini, a huge old building which John has turned into 4 levels of proverbial rabbit warren.

John is already at work flat-out as usual cell phone humming away waving his arms pointing directions to his Swazi staff, listening to his SiSwati clicking tongue clicking away…..  he indicates to me he needs to check some work issues out and Peggy has a cup of tea ready for me upstairs so will see me later…No worries John I replied…. as John‘s phone rings  again and he is off in the usual rush.

Sure enough tea was waiting next to one of Clintons computer’s…. As I log onto the net and spend the next hour replying to emails, Clinton is flat-out working on another Large Electrical installation tender document which needs to be completed ….so I try and keep my usual motor mouth under control.

Clinton asks all well back in Australia……????  as I am currently replying to Adam….sure looks as if all is well just had an email from Adam our eldest son ….but it looks pretty wet in Canberra.

Not as wet as it will be here when the wet season hits in a few months Clinton replies.

Leaving the safety and beauty of Qwabiti was going to be hard especially the hospitality which Elayne and I had enjoyed so much. Victor had been looked after so lovingly, John’s workshop team had spent hours putting all the possible attention Victor could had ever wanted.

The list of parts and spares bestowed upon poor old Victor was almost endless, and every possible chance John had to visit the workshop (any excuse for John to leave his office and muck in) was to try and find another part to donate from his racing stores.

Peggy asks if I can join John down at the workshop….so down goes the Rooribos tea and I trot off to the workshop………….I am shocked on arrival…………….

What do you think of Victor John asks  ….John proudly standing next to Victor with his workshop crew Moses and Rafik and Mr Lewis (the welder) and another Mr Lewis (the painter) (all work on John’s Zarco P class off road racing Buggy)….words failed me as I stood looking at what looked like a new car…..Victor looks great ….I replied just great. ….. I could not believe what I was seeing…… Victor is not his usual beaten up self my eyes struggle to take in his transformation…..

All new paint (matching the same as before) new tyres, painted wheel rims, new C’v’s, new battery, new filters, oil, diesel tanks filled to the brim, new seats which cover our fuel tank filler caps a great idea, beautiful Tig welding for the main rear shock support towers just in case, (the welding was a work of art) ….John seeing my interest in the welding remarks… Africa is a tough place off road and should break most engineering you through at it, the new gusset will help take a little more strain on off the shock towers….I nod in agreement…but the list goes on…..new Gearbox out put spine housing, new spare rear axle, 2 x front shocks, new shovel, fuel bowl guard, extension clutch and brake reservoirs, re stitching our rear holding bag, re fitting our exhaust pipe, the list goes on and on….. A lump pop’s into my throat every time I think back to that great bunch of people in John’s office Peggy and Clinton those wonderful lunches we all had at Bakers Corner and many more restaurants around Manzini and Mbabane.

I struggle to take in the smiles looking at me, beaming faces of participation they are now an intrinsic part of our journey ….the work which has been done is endless….I struggle to find the words to thank John and his workshop team plus all the wonderful staff at Mormond Electrical …….my eyes wheel up I am lost for words….I am really lost for words they just don’t come out. (Yes I know hard to believe from me!! LOL J )

100% Chris, 100% John I replied…..   Let’s grab some lunch….. John broke the silence….  I know John has enjoyed restoring Victor back to his former glory…..and John just loves surprising people … and surprised I was……………… stunned as a mullet as we would say in Australia.

We will never forget Johns kindness his 100% generosity, time for others and true friendship.

His gleaming new paint work and new tyres …he looked as if he had just driven out off our shed back in Australia 4 1/2 years ago when we first constructed him. 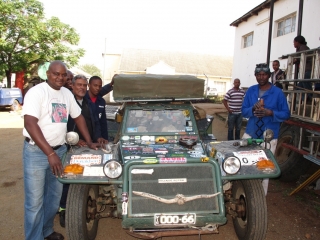 Elayne could not believe her eyes our new Swazi Victor looked to good to head north and hack through the African bush, but that is exactly what was in store for poor old Victor and us.

John had travelled down through Africa some 20 years before in an old Landover with an Australian couple and some Swiss friends…a time I can only dream about…Algeria, Central African Republic, former Zaire, The Congo Basin….over 20 countries, watching John’s old slides one night at Qwabiti was a special treat for travellers like us the memories clearly brought back those days gone by. John loves to travel and sharing some old tales from a far off place back in time and endlessly captivates our attention.

Sara Jane (SJ)  could not have opened up her home more to strangers a truly fabulous ambassadress thanks so much SJ  for putting up with that constant conversation with John and I discussing, Travelling on a shoe string….  (A subject which was not appreciated by SJ)…  suspension …….tyres……….Gearbox……every conceivable part our off road warriors used.

Thanks so much SJ for your major roll in arranging our visit to show and tell Victor and our travel stories …..Usutu School ………., and David…… was just a hoot of a principal we would all love to have had in our days at school well done David and all you great team of teachers (we had so many laughs with you all and you made us so welcome). 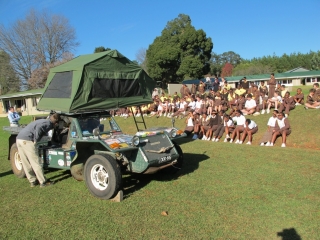 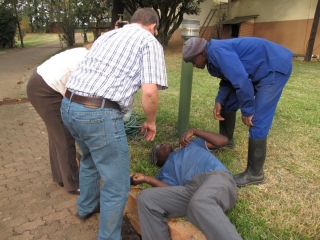 John Thomson helping a Swazi worker which has just been attacked by a Spitting Cobra. 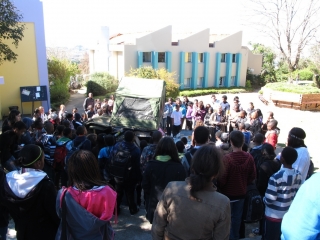 Also our article in the Swazi Times meeting the editor and owner Paul Lofler…..thanks Paul for publishing our Adventure around the world and in wonderful Swaziland.